A Film by David Ofek, Ron Rotem and Elinor Kowarsky

On June 2002, a bus on its way to Tiberius from Tel Aviv, was bombed. 17 people were killed, 16 were identified. No. 17 wasn’t. He was buried a few weeks later – anonymous. The police stopped searching, believing that he must have been a foreign worker.

This is where the filmmakers step in, documenting in real time over a period of six months the search for the identity of a man no one claimed missing. The film takes the form of a detective investigation, but also pursues the stories of several people who were affected directly or indirectly, by this bombing, creating a tragic-comic portrait of a society living under the shadow of death. When it seems that the investigation has reached a dead end a vague lead appears…

“David Ofek’s small, chilly documentary ‘No. 17.’ … is a glum detective story… The film could be seen as Mr. Ofek’s personal response to violence in a place where people, shellshocked by terrorism that has no end in sight, increasingly take the state of siege for granted.” Stephan Holden, The New York Times

“The journey of the filmmakers to the identification of an anonymous suicide-bomb victim is not only an astounding story, but also a fascinating documentation of the anomaly in which the Israeli reality exists… They came back with a masterpiece.” Gal Ochovsky, Ma’ariv

“An Israeli documentary that is fascinating and complex, but also decent and moving” Uri Klein, Ha’aretz

“’No. 17’ strikes the viewer with the sad, shocking circus of current day Israel. A wonderful film.” Ra’anan Shaked, Yediot Aharonot 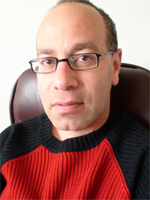 David Ofek graduated from the Sam Spiegel Film School in Jerusalem in 1993. Among his Films: “Bat Yam – New York”, “5 Love Stories”, “Take Away”, “The Barbeque People” and “Melanoma, My Love”.